The gecko is an animal that has always fascinated everyone, hardly anyone is afraid to see one, because its appearance is curious. Perhaps not everyone knows that they can stick and detach on any surface without the need to use adhesive secretions.

This is why we can see them on the walls, in the ceiling, on a tiny leaf and so on. Where is the secret? In the Van der Waals force , named after the German scientist who first identified it. Basically it is an attraction that occurs between molecules, the gecko has tiny hairs on its legs. A single leg can support 20 times the weight of the gecko. There are 2 million hairs in all, so imagine why they can easily scurry from ceiling to ceiling.

These reptiles can withstand a pulling force of around 2 kg which allows them to cling to a leaf after a fall by touching it with only one leg.

Another curiosity is that they are the only reptiles to emit a sound that is not the common hiss. Finally, some species are generated by parthenogenesis, ie the females are able to reproduce without mating with the male. Furthermore, thanks to an autotomy process, through the contraction of special muscles, the gecko is able to voluntarily amputate its tail . This process is useful for distracting predators and thus getting rid of them without running the risk of being eaten. The tail subsequently regrows quickly and of the same length. 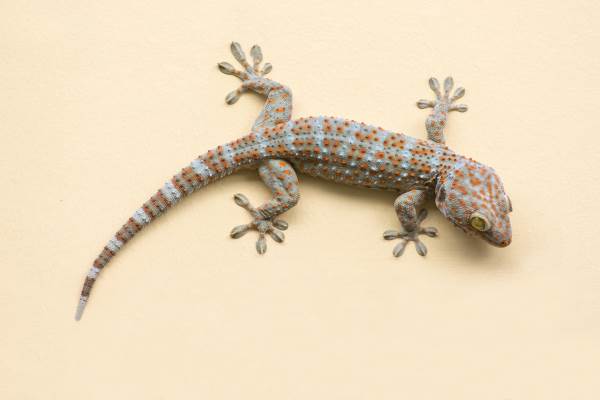 According to the tradition of the indigenous Australians and New Zealanders, the gecko represents the value of adaptability, because it is an animal that survives difficulties, as they say it adapts to any situation.

It is a reptilian reptile, tenacious and calm to which the Polynesian aborigines attribute supernatural powers and look at it with a sense of awe and awe. Just like turtles, geckos are considered animals that act as a link between the world of the living and that of the dead, silent sentinels of the past.

In the Philippines and Thailand, where the Tokai gecko lives, it is said that if the song of the Tokai is heard at the birth of a child, the unborn child will have a long and happy life. The symbology of the gecko is always a symbology with a positive charge, whatever the type of culture taken into consideration, even if an ancient popular belief has it that if you see a gecko laughing then it is a harbinger of disease or bad luck.

Geco: because it brings good luck

Having a gecko in your home is considered a good omen in many countries. The reputation of good luck probably has its roots in the fact that these discreet and silent animals clean up the house of all those annoying insects such as mosquitoes and flies that are often difficult to drive away. An adult specimen is capable of eating up to 2,000 mosquitoes in one night, so it is wrong to try to eliminate these beautiful and useful animals.